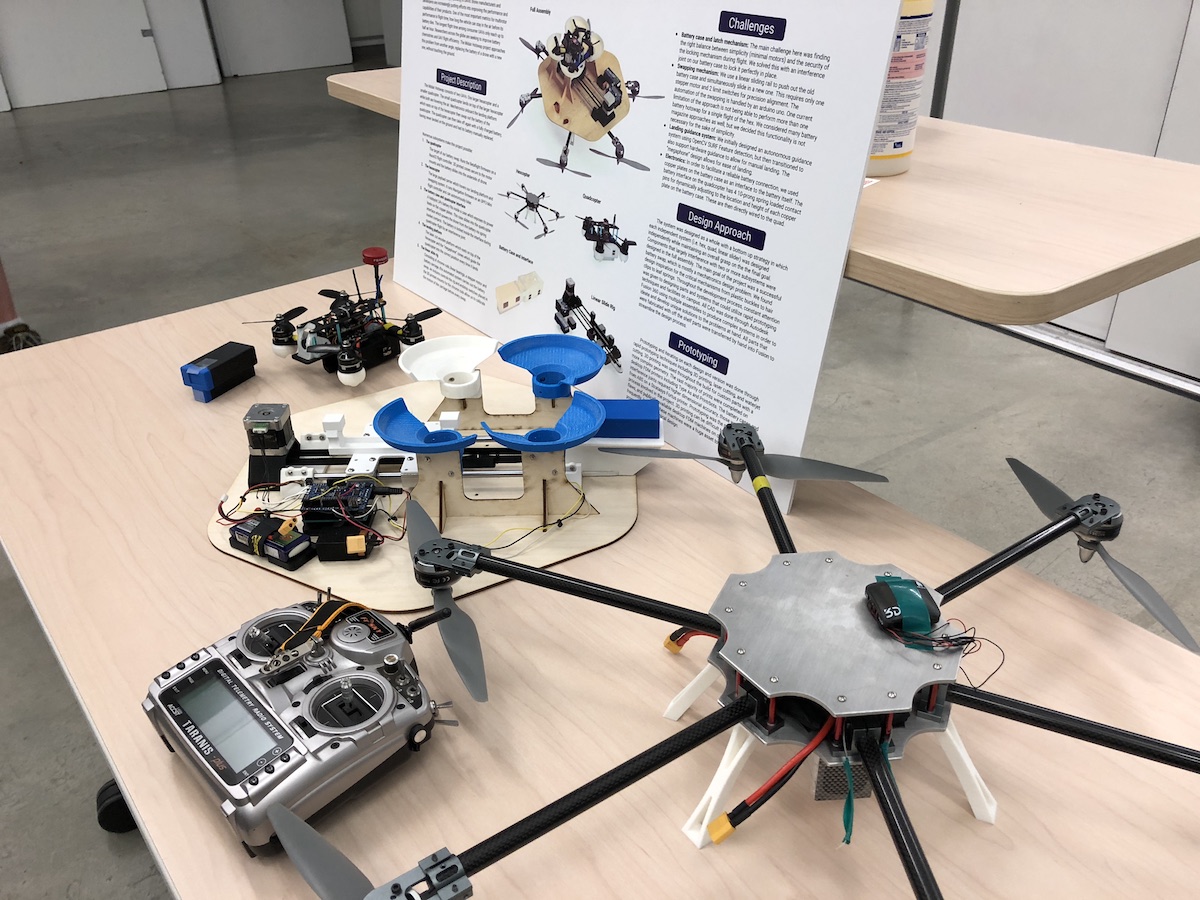 The Midair Hotswap is a project I did within the [email protected] student organization campus at Cal which I now lead as President. I began this project at the start of my Sophomore year as a Team Lead. We started with about 12 people and over the course of the 3 semesters we worked on this project, we ended up with a team of 5 dedicated undergraduate engineering students who stuck it out till the bitter end. This project was incredibly rewarding to work on. Not only did my technical knowledge, prototyping intuition, and design methodology strengthen over the course of the 3 semesters, my understanding of how to work in a team grew enormously. From simple face to face communication on technical topics, to delegating tasks that play to the strengths of each team member, to maintaining a unified vision, and even keeping my team motivated and inspired to pursue this project, I couldn’t have asked for a better platform to grow as a future professional engineer.

In response to growing popularity in UAVs, drone manufacturers and developers are increasingly putting efforts into improving the performance and capabilities of their products. One of the most important metrics for multirotor performance is flight time, how long the vehicle can stay in the air before its battery depletes. The longest flight time among consumer UAVs only reach up to half an hour. Researchers across the globe are seeking to improve battery chemistries and UAV flight efficiency. The Midair Hotswap project approaches this problem from another angle, replacing the battery of a drone with a new one, without touching the ground. 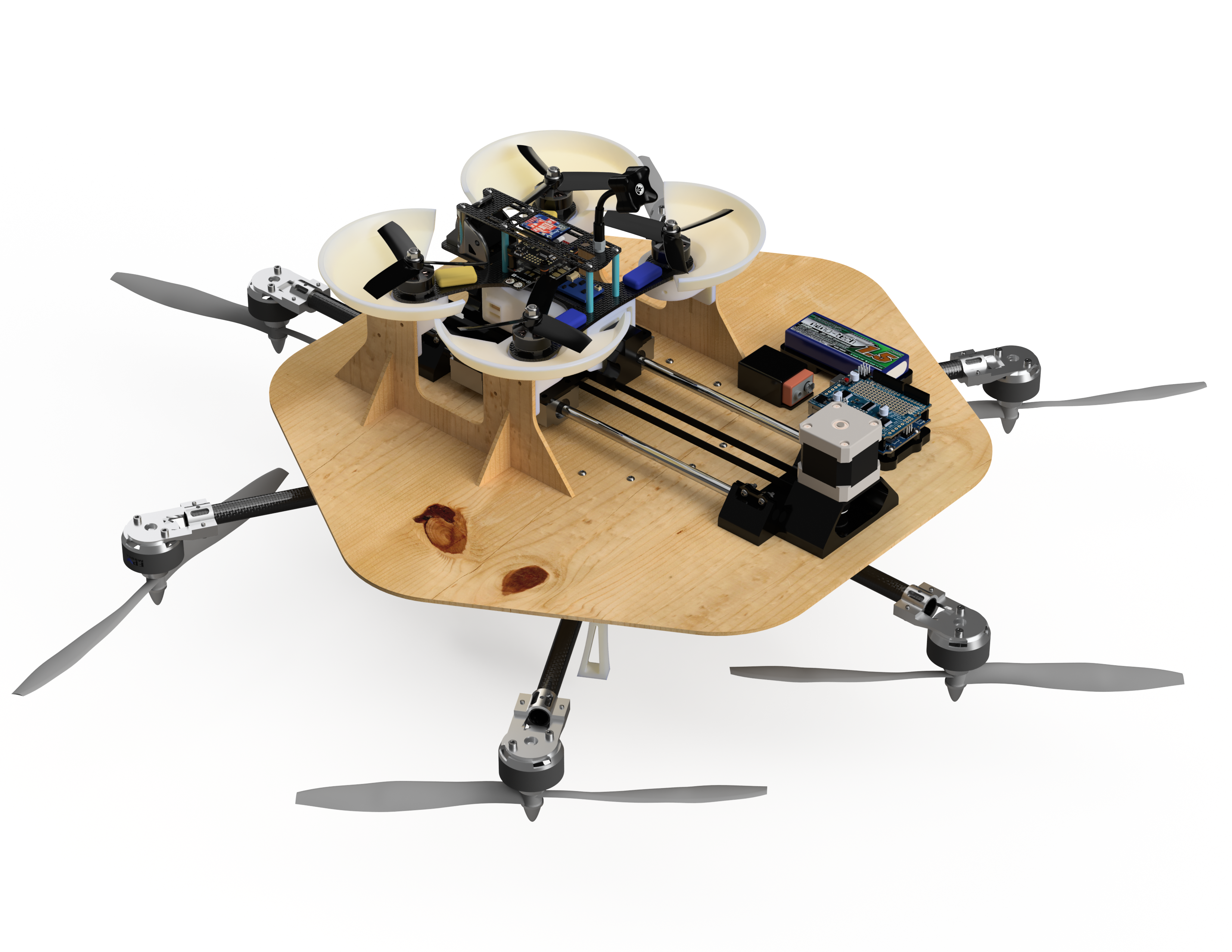 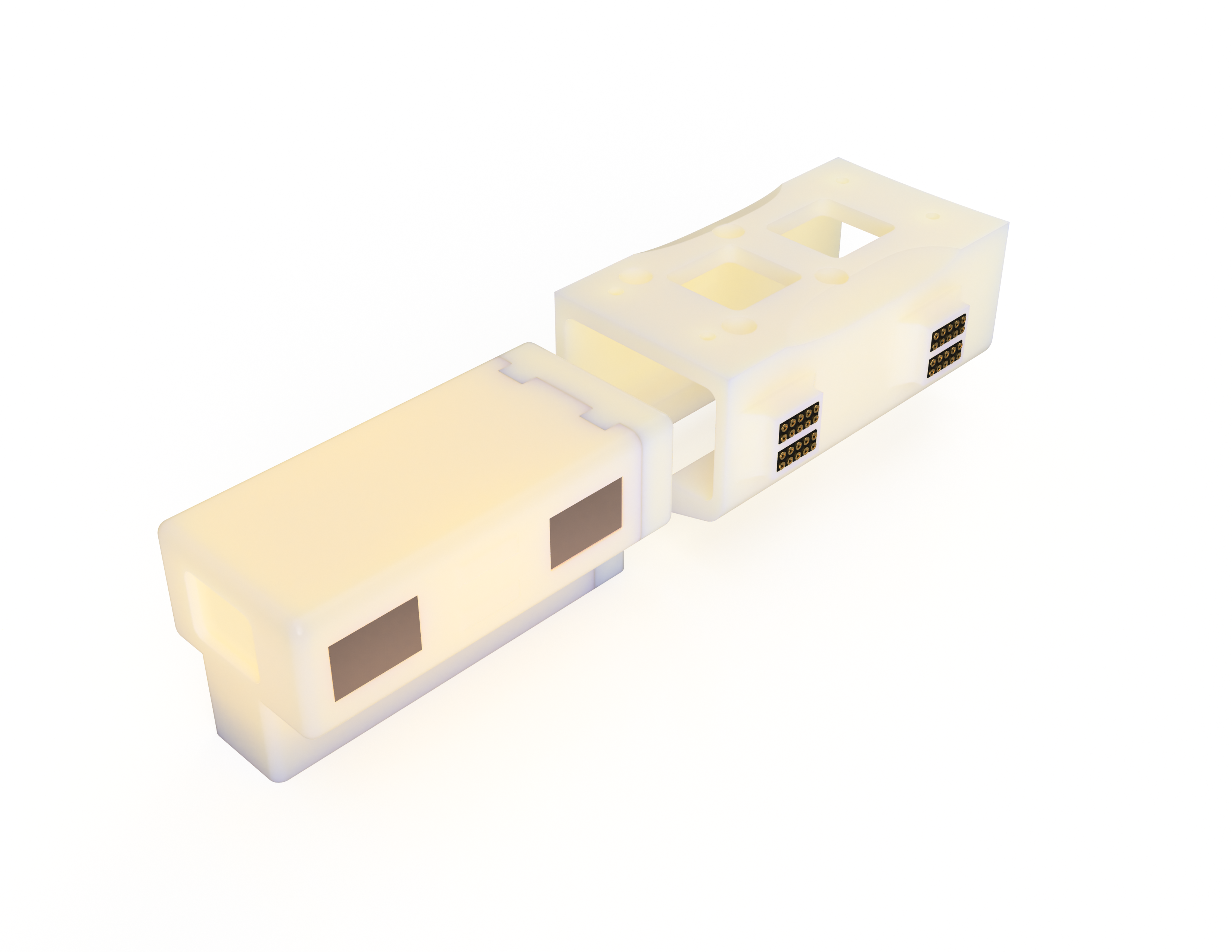 The main challenge here was finding the right balance between simplicity (minimal motors) and the security of the locking mechanism during flight. We solved this with an interference joint on our battery case to lock it perfectly in place.

We use a linear sliding rail to push out the old battery case and simultaneously slide in a new one. This requires only one stepper motor and 2 limit switches for precision alignment. The automation of the swapping is handled by an Arduino Uno. One current limitation of the approach is not being able to perform more than one battery hotswap for a single flight of the hex. We considered designing battery magazines that carry many batteries at once but decided to skip this feature for our proof of concept.

The system was designed with a bottom up strategy in which each independent system (i.e. hex, quad, linear slider) was designed independently while maintaining an overall grasp on the the final goal. Components that interface with two or more subsystems were designed in the full assembly. The main goal of the project was a successful battery swap, which is mostly a mechatronics design problem. We found design inspiration for the critical mechanisms from plastic buckles to hair clips to leaf springs. Throughout the development process, constant attention was given to designing parts and systems that could utilize rapid prototyping techniques and facilities on campus. All CAD was done through Autodesk Fusion 360 using multiple assemblies to produce complex systems to ideate and develop unique solutions to the problems at hand. All parts that were fabricated with off the shelf parts were transferred by hand into Fusion to streamline the design process. 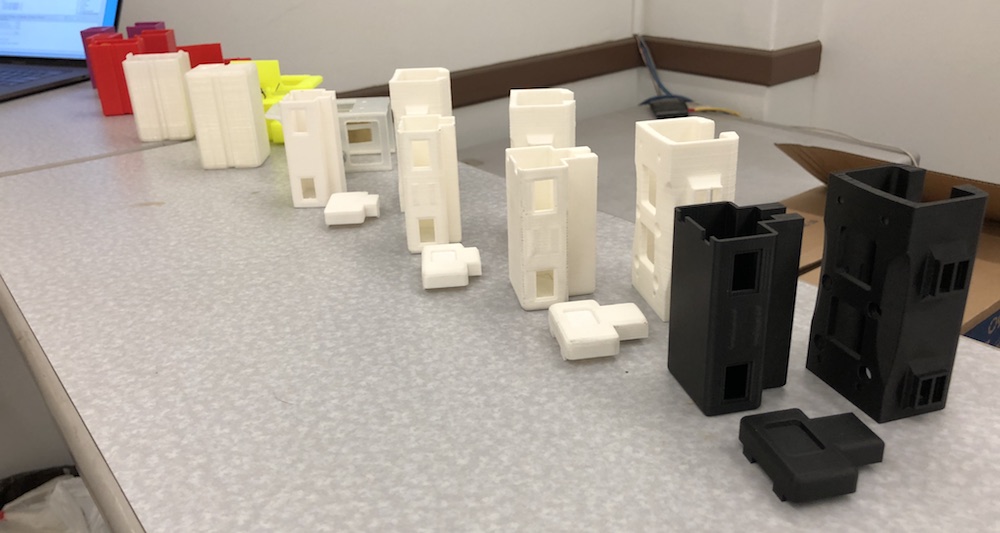 Iterating on each design was done through rapid prototyping techniques including 3D printing, laser cutting, and waterjet cutting. 3D printing was used throughout the build for custom parts with a more complex geometry. The vast majority of prints were completed on desktop FDM printers including Type As and Printrbots. The battery cases and interference joints required higher dimensional accuracy, those were printed from ABS on a Stratasys Fortus printer. 3D printing can be difficult to use, has inherent flaws, and publicly available desktop FDM machines on campus fail frequently. Though these machines can be frustrating, the frequency with which they allowed us to iterate on parts with complex 3D geometry was a huge asset to our project and the progress of our mechanical design.

To finish off the project, the team and I designed this poster to hang in the UAV lab on campus. We’ll display the project to hopefully inspire future generations of [email protected] students to try something equally ambitious. 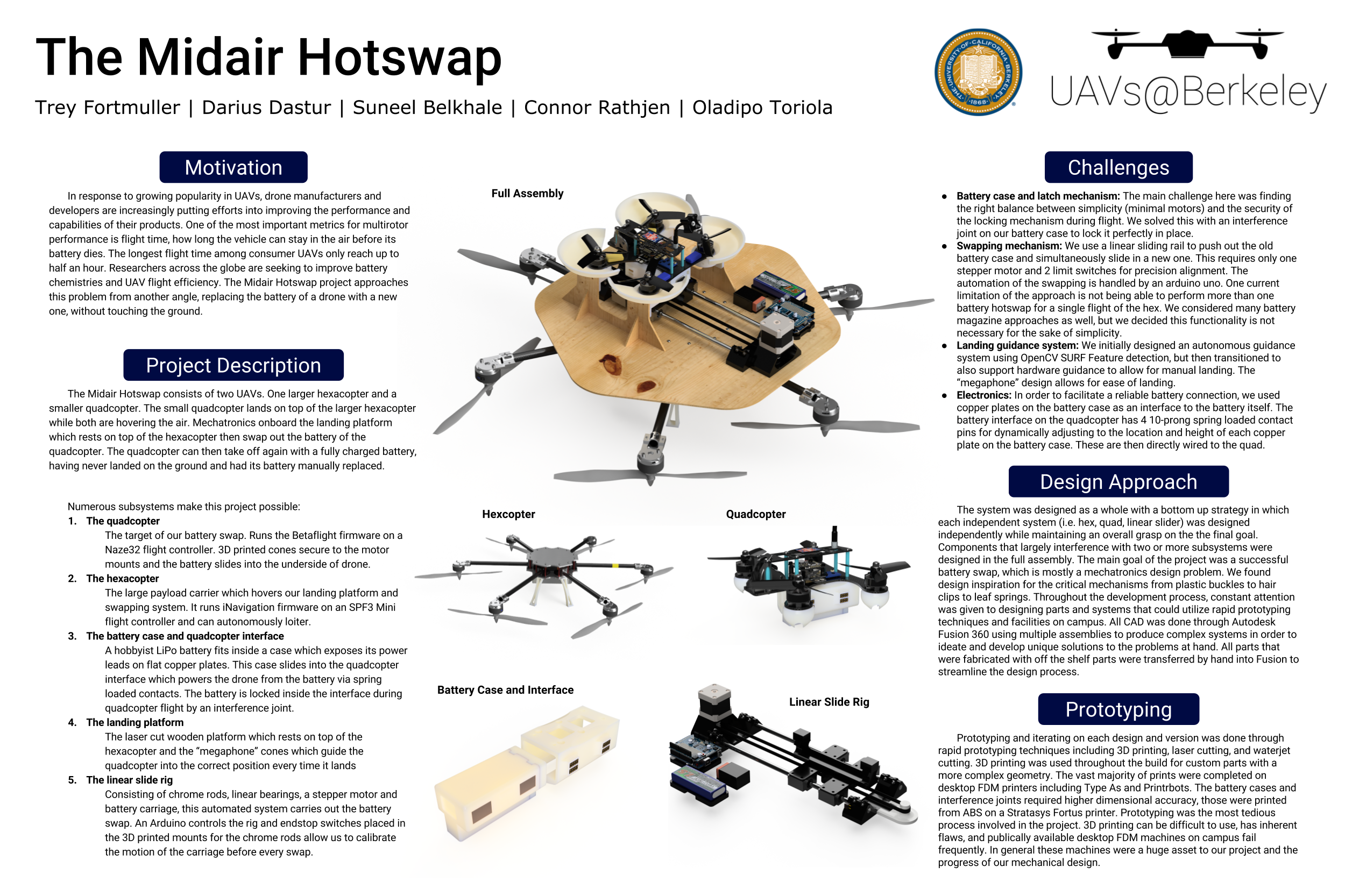 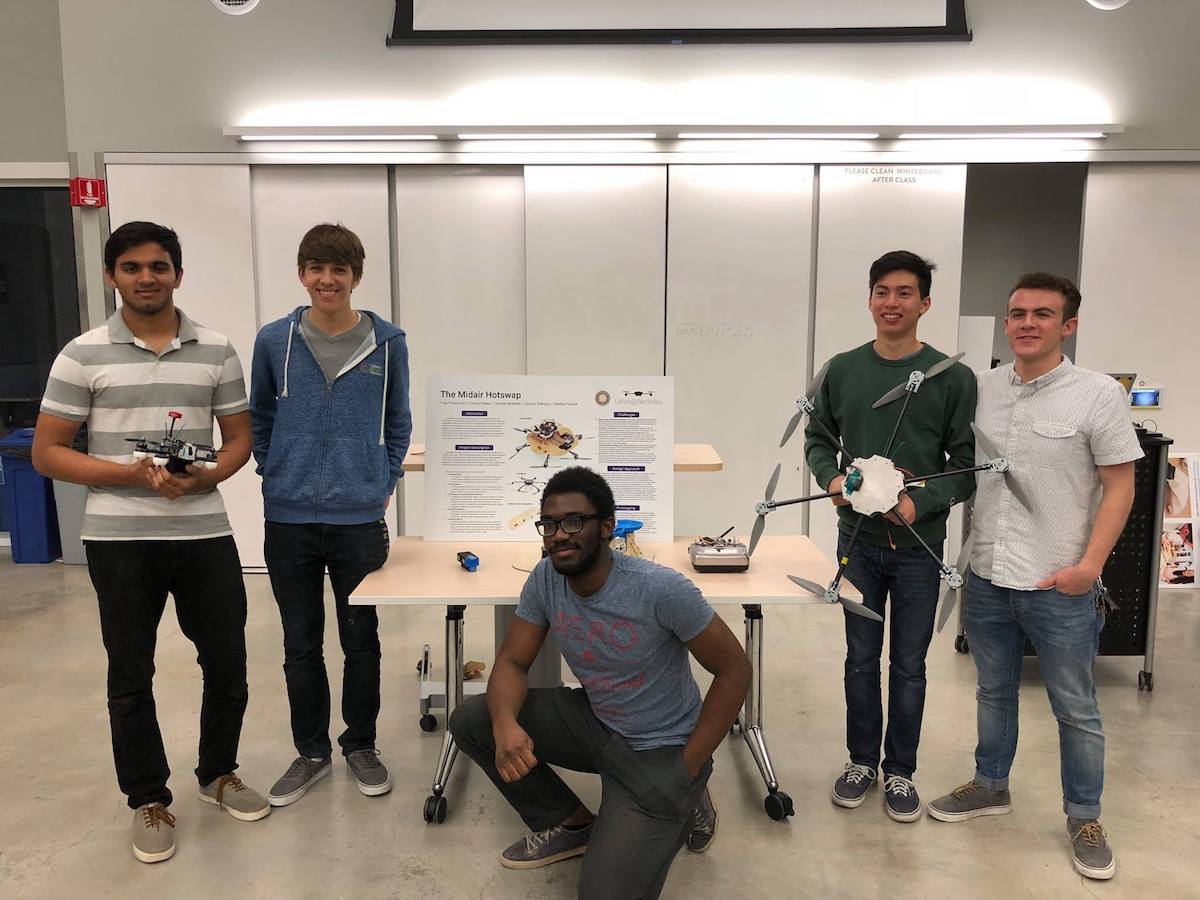 Jeff Lee is a Program Manager for Field Engagement in the Autodesk Education Experiences group. Jeff has helped [email protected] get onboarded with Autodesk’s cross-platform CAD tool Fusion 360, which was used throughout the mechanical design of the Hotswap project. We were lucky enough to have our project featured in Jeff’s “Day In The Life” Autodesk employee profile video series, check it out: